A few people on the Star Trek Online forums (notably ThomastheCat) have come up with ideas for minigames (discussed here). The idea is that they would replace the “find an item and press F” mechanic with something more interesting and situation specific.

The forum post has more detail, but a lot can be communicated with just the mockups that have been made:

And if you’re not already a player, remember you can get a free trial of Star Trek Online.

I’ve been playing Star Trek Online since the open beta at the end of January and my opinion of it is generally positive. That isn’t to say there aren’t problems, in fact I agree with most of the complaints about it (and the forums have a lot). The difference with me is I still think it’s fun to play in the mean time (I still think the space combat is the best any Star Trek game has ever had). I recently came across a series of ideas to improve the game posted on the forums by the player Daren Kitlor (although many others were involved in developing the ideas). This is my attempt to make a few more people read them and hopefully support them (since they are all really good). Here they are, in my order of liking:

And remember, if you’re not yet a player you can play a limited demo for free (sadly without the cool ideas above yet).

Cryptic Studios have just launched the Star Trek Online referral program. They encourage old players to bring in new players by giving them free in game stuff (specifically the future Enterprise from All Good Things with three warp nacelles as a ship option). To make it easier to persuade people, referred players get to try a demo of the game for free. It does seem the demo will be made freely available in the near future anyway though. The demo has the following restrictions:

The last is the important one really. Anyway, if anyone wants an invite, send me an email (each player can only have five pending invites).

There is a mission in Star Trek Online that is causing no end of problems. It caused problems in the beta and people assumed it was bugged. It was the same in headstart, and it is the same now. Everyone assumed it was just broken. But apparently someone submitted it as a bug and got a reply saying it was working as intended. It’s just confusing :P This mission is called “Salvaged Relationships in the Neutral Zone”. It’s in the Ker’rat system in the Eta Eridani Sector block. It has two parts, the first part is to scan 8 Borg encryption nodes. This part is easy and fine. The next part is to destroy 4 Repair Hulks. This is where it gets confusing. There are many Borg vessels around as well as several Repair Hubs. The problem is Repair Hubs are not Repair Hulks. Destroying 4 Repair Hubs leads to the mission being failed (at least for Federation players). Apparently (although I haven’t seen it myself yet) destroying enough Borg Cubes leads to the Repair Hulks warping in. So hopefully someone will search for this mission, find this page and learn how to do the mission. You see, the mission is a large arena style mission with up to twenty players, and if just one of them goes off destroying the Hubs, the mission fails. So I’ll just post in big letters here: Repair Hulks are not the same as Repair Hubs. Don’t destroy Repair Hubs (at least if you’re Federation)! PS - Since I’ve never seen the mission complete this is all just a theory at the moment. Except that destroying the Hubs ends definitely the mission without success…

Some screen shots I took during the end of beta event for Star Trek Online. 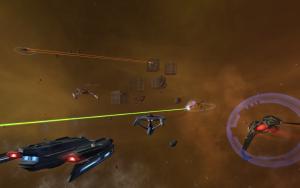 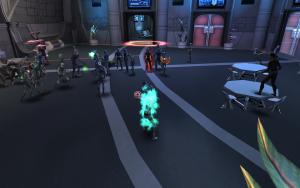 For the past week or so I’ve been playing the open beta of Star Trek Online. And I have to say, after some initial concerns my overall opinion is very positive. There has been quite a lot of negativity about the game on the forums, and on the whole I agree with most of it. But the things that are good about far outweigh the bad in my opinion. The most overwhelming positive note for me is the space combat engine is probably the best I’ve seen in a Star Trek game. The only other one I can think of that is close is the one from Starfleet Command, but that loses points for having far too many non-canon elements (missiles?). The ground control side is the biggest “bad” part of the game. The controls are non-intuitive, everything’s a little chaotic in combat, and the non-combat missions are pretty dull. I call it “bad” in quotes however since despite the flaws, once you’re on a mission with four other (real) people fighting an army of Klingons it’s still tremendously fun. Another big plus for the game is the backstory. For those you don’t know, the game is set inr 2409. That’s a 30 years after Deep Space 9, 25 years after Nemesis and nearly 15 years after “normal universe” elements of the 2009 Star Trek movie (and it is set in the “normal universe” - the one that has a Vulcan, but no Romulus). The creators realised that conflict is a big part of games, and when it comes to games even Star Trek strays from it’s utopian diplomacy-and-mutual-respect-and-understanding-is-the-key-to-everything ideals and so the story has been cleverly written to allow a lot of conflict. For example, at launch the game is mainly the Federation vs. the Klingons. I strongly suggest anyone interested in Star Trek to read the backstory whether you intend to play it or not. So overall, if you’re interested in gaming and Star Trek, give it a go. There are beta keys available from various places, or you could pre-order it and get one. Or just wait for the release date on February 2nd.

The biggest news in the EVE Online World recently (and in my opinion, some of the biggest news in gaming) is the announcement of DUST 514, a console FPS/RTS being developed by CCP and based in the EVE Universe. On the surface DUST looks a lot like a slightly grittier Halo 3. Basically a futuristic first person shooter with a strong focus on vehicles. The big point comes from it’s interaction with the EVE Online universe. The combat in DUST will take place on the surface of planets in EVE. As a consequence the result of battles will effect EVE. How big this effect will be (and in exact nature is not yet known). What we do know is that it will tie in with the upcoming changes to sovereignty in the Dominion expansion to EVE. A few people have responded with horror to this,  worried that control of their systems will now be at the mercy of some crazy twelve year old console dude. Although it’s probably wise to have a little concern, DUST has been in development for two years and EVE Online is CCPs flagship product - I don’t think they began this endeavour without some serious thought. Personally I think it’s an amazing idea, creating a universe that can entertain two rather disparate audiences (PC MMO players and console FPS players) at the same time and hopefully make them both more fun because of it. More info should be forthcoming at EVE Fest, on October 1st.

Factional Warfare will soon be upon us. I stopped playing EVE several months ago with the plan to return once Factional Warfare was in (which I figured would be a couple of months since it was suppsed to be part of Revelations. Well the next expansion, Empyrean Age will finally bring it to us. It’s not going to be quite as drastic as my hopes but they were pretty drastic :P Basically you sign up for FW with one of the four factions - that is Caldari, Minmatar, Amarr or Gallente (they’ve said other factions will probably be added later). You then have kill rights on that factions enemies anywhere (0.0, lowsec, highsec - even Jita, which will be even sillier than it has been). The factions enemies will obviously have kill rights on you. At the moment it seems it’s just going to be Caldair vs. Gallente and Amarr vs. Minmatar. Joining the fight gives you access to special missions that will involve attacking your new enemies. As one faction wins fights in a system it gains “points” there. Enough points and that factions takes the system. It seems that, at least initially, only lowsec systems will be up for grabs in this way. Finally, to balance out the fact that Caldari have little lowsec, a new region has been added basically in the middle called Black Rise that is mainly Caldari lowsec.

As of Tuesday it seems EVE Online will be officially supported on Macs and Linux. The Linux version seems to be just improved (and official) support for running EVE with Cedega (a commercial WineX fork). At the moment only Ubuntu, openSUSE and Linspire are supported (and come with nice packages). The Mac version was developed using Cider (a modification of Cedega for Macs) and only supports Intel Macs. The minimum hardware requirements are interesting. PRocessor and RAM are the same at 1.8GHz+ 1GB respectively. Mac users require a better graphics card than Linux users but the Linux version doesn’t support ATI graphics cards. I would guess 6 months to a year down the line when AMD have finished releasing open source versions of the ATI drivers then ATI support will exist for everything in Cedega. Full info about the Linux and Mac clients The other features in this release (Revelations 2.3) - incredibly minor http://myeve.eve-online.com/updates/patchnotes.asp?patchlogID=154

Tonight (well tomorrow morning) Revelations II is deployed. Lots of changes affecting everyone from solo players up to major alliances. I’ll summarise the things I find most important personally (for a non-alliance (and at the moment non-corp) player).

If you’re not already an EVE Online player, get a free EVE trial account, and if you already a player, get some EVE Game Time Codes :P

This is an imported post and may not be formatted correctly. View the original here.
« 2/7 »